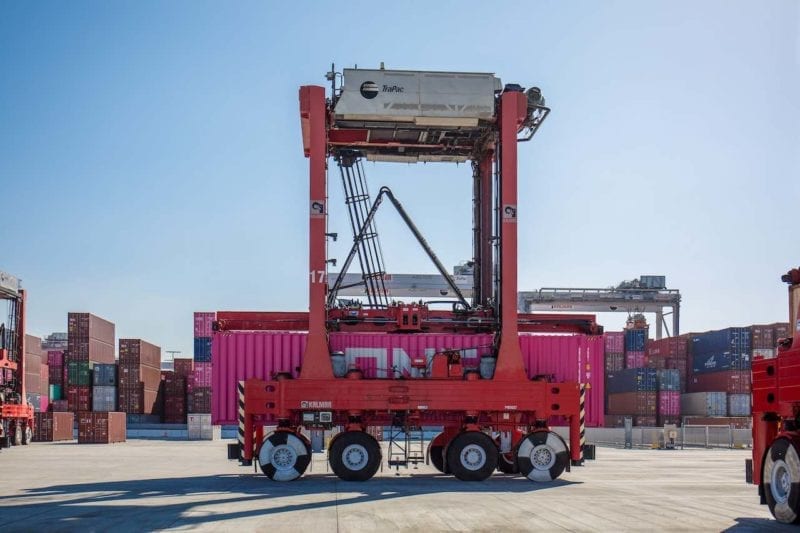 The TraPac San Pedro Bay facility in Los Angeles is the first automated container terminal in North America, bringing more goods through the same footprint, with faster truck turn times and a 90% reduction in emissions.

Container terminals are vital links in the U.S. supply chain between manufacturers and consumers. The TraPac San Pedro Bay facility in Los Angeles shows how automation enabled terminal operators to move goods more quickly and efficiently, while doing more to protect the environment and workers.

The facility is the first automated container terminal in North America (see Figure 1). Automation bringing more goods through the same footprint than a manual facility, with faster truck turn times and a 90% reduction in emissions. The company also operates container terminals in Oakland, Calif., and Jacksonville, Fla.

The Los Angeles and Oakland terminals have a cargo capacity of 1.6MM TEUs and 650,000 TEUs, respectively, with volumes increasing. TEU stands for twenty-foot equivalent unit, a measure of containerized cargo. Agricultural exports from the Midwest and imported goods from Pacific Rim countries transit through the terminal.

An investment toward automation
“We’ve invested in the future, using automation technologies to move cargo through the terminal quickly and safely, heighten security for personnel and cargo, minimize customer risk and delays, and reduce emissions,” said Mark Jensen, vice president for asset management at TraPac.

By confining most container handling functions behind a secure fence, the operation is also safer, with many features designed to keep humans and machines separate, such as kiosks to protect truck drivers as automated equipment moves to load or unload their trucks. If a driver steps off the pressure sensor pad in the booth, automated equipment is immediately halted. These and other safety features were implemented through secure collaboration to aid large-scale remote operations.

Linking efficiency, safety with Profinet
A Profinet Ethernet network links the automated stacking cranes at the terminal and allows facility-wide programmable logic controller (PLC) monitoring of devices to maintain uptime and safety, while ProfiSafe is integrated into the access control for the automation system (see Figure 3). (ProfiSafe is an additional software layer that provides functional safety over the bus on top of existing Profibus and Profinet protocols.) The conveyor that moves containers through customs scanning also uses Profinet.

“The risk controls call for a deterministic automation network to provide for predictable heartbeat-type PLC monitoring from field devices that, in turn, allows other elements of the system to respond in a known time to both expected and emergency commands,” Jensen said. “For example, in the event of an access point being forcefully breached, the automation control system is able respond in sub-seconds, bringing our massive cranes and [automated straddle carriers] to a stop.”

The multi-protocol multi-vendor approach
Profinet and Profibus communications are deployed in two main ways at the terminal. “Profibus is the dominant protocol between the PLC and motion drives in the automated cranes,” Jensen said, “while Profinet is used extensively over the crane itself with both copper and fiber physical layers. Profinet also connects the automated stacking cranes, access control and the centralized controller PLCs. This across-facility communication to bring cranes and access control together also relies on a combination of copper and fiber physical layers.

“In the case of the across-facility communication application between PLC equipment nodes, this includes a lot of heartbeat-style monitoring by the PLCs to ensure a continuously connected fail-safe system, as well as grander automated interactions between the paired cranes on common rail runways within a crane block.”

The automated stacking cranes were the first to use a Profinet network at the facility. Modbus is used in a number of other applications, and intra-equipment systems deploy other fieldbuses, such as CANbus, CANopen and ASi. Wireless communications also link the automated straddle carriers and various portable devices, such as those used by union clerks for exception handling and for reefer monitoring by union mechanics.

“Throughout these communication arrangements, we are interfacing across many brands,” Jensen said. “Additionally, we maintain certain redundancies within our infrastructure to effectively manage scenarios that may create delays.”

On-dock rail uses Profinet for remote desk connection for exception handling. “Our intermodal yard cranes also interface with the infrastructure and systems through an orchestrated automated arrangement,” Jensen said. “As a company, we are continuing to improve and surpass challenges through equipment abilities and operational scenarios.”

Kalmar, a Finnish maker of material handling equipment for container and industrial applications, designed and manufactured the terminal’s automated systems.

A multi-stage transition
The TraPac terminal’s transformation from diesel-powered material handling equipment to automated grid-electric with hybrid machines was accomplished through a multi-stage project, allowing the terminal to keep operating on schedule throughout the transition.

The first phase, which began in 2012, saw the installation of the first auto-strads and the first four automated stacking crane blocks. This was followed between 2014 and 2018 by 11 more crane blocks and an increase in the auto-strad fleet.

The automated stacking cranes, which can stack containers up to five high and lift loads up to 41 tons, have enabled TraPac to stack containers more densely, freeing up space for the intermodal rail system, which also was brought online during this period. It’s the only fully automated, emissions-free on-dock U.S. rail yard.

“Although it does not exclusively rely on Profinet, the interface has been improved,” Jensen said. “With continued reliability, interfacing communication and behaviors have allowed better handling of containers for landside delivery. This is achieved by maintaining a driver on a pressure sensor in their respective kiosk box, allowing the crane to operate and safely handle the evolution at the landside transfer point.”

A cleaner ecosystem, faster motion control
“By being able to pack containers more densely, we’ve been able to better match yard capacity to berth capacity as well as reallocate space for intermodal operations,” Jensen said. “Before, we had to truck every container through local streets to the terminal. Now, with 30 percent of the collection and distribution moves completed by rail, street congestion and emissions have been reduced and containers are moved more quickly to rail hubs closer to the beneficial cargo owners.”

There has also been a huge reduction in emissions from over-the-road truckers in the vicinity of the terminal, according to Jensen. This is important because an average of 1,000 trucks move through the terminal during each shift, with nine shifts every week.

“A key difference in our automated terminal area is that we get the truckers to an automation area where they wait (engine off) while we collect or bring the containers to them as the case might be for either single or dual transactions. This way of working significantly reduces the truckers ‘engine on’ time within our terminal,” he said.

Emission control measures even extend to the ships that call at the port, with 100% of the vessels using alternative maritime power (AMP) or an equivalent technology to reduce pollutants and greenhouse gases. All of these advances have created a near-zero emissions ecosystem at the Los Angeles terminal, in keeping with California’s strict environmental requirements and TraPac’s goals for achieving a more efficient, safer and cleaner operation.